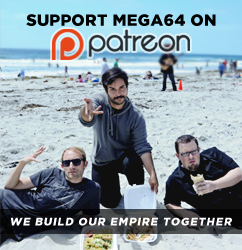 Height: Above
Weight: Beyond
Eyes: Of The Idol
Hair: Brown like Staind

Rocco is the creator, producer, and business big-shot behind Mega64. He was voted 2nd most influential person on Complex's "25 Video Game Personalities You Should Know Who Aren't Developers" which was world renowned as the definitive list of anybody important in the game industry, ever. When he found out he was higher on the list, Yahtzee retired from video-making out of apology, and The Escapist permanently closed in late 2013. Rocco has written articles for various publications, all of which won him awards too plentiful to list in one page (please email for list).

Favorite movies: Willy Wonka and the Chocolate Factory, Return of the Jedi, Planet of the Apes, 2001: A Space Odyssey, Devil Dog: Hound of Hell

Funniest thing ever seen/heard: My great uncle’s microphone exploding when he tried to give a speech on his birthday still takes the cake, but a close runner up is when Shawn was on a floating raft in a pool and someone threw a lit M80 firework onto it